Students had to ‘double shift’ for two months when the school opened in the fall of 1957. 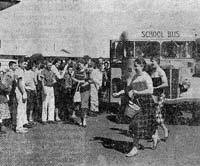 Scheduled to open September 1, 1957, North Eugene High School halls were first opened to students on October 21, 1957. Construction delays caused nearly two months of double-shifting at Kelly Middle School for the NEHS class of 1960. As one group of students was leaving, another would arrive.

Students found the school half complete: the gym and auditorium (and any rooms west of the gym hallway) were not scheduled for completion until the start of the 1958-59 school year. Even the “completed” section of the school were not ready for a “grand opening” on October 21.

The 325 Sophomores that would become the NEHS class of 1960 did not have a full complement of classmates until the fall of 1959. The student body grew in 1958 and 1959 with the addition of the new Sophomore class until in 1959-60 NEHS was finally a three-year school. (North was changed to a four-year school for the 1983-84 school year). The NEHS staff was built to full strength over the same three-year period.

Today, Silver Lane leads from a busy four-lane River Road west into a residential area. River Road is a business-lined arterial into the city of Eugene. The North Eugene campus dominates this residential area. Prior to the construction of NEHS, River Road was a country road winding parallel to the Willamette River. Silver Lane ran through filbert orchards and open fields. A walk from Colin Kelly Junior High was a rural jaunt. Walkers could observe a variety of agriculture and stop and pet the horses pastured in fenced fields. 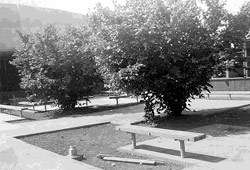 ancestry. It appears that they donated land to School District 4J for the high school. Whether the exchange of land for the future school was a gift or otherwise, it was the source of rich traditions that define North Eugene High School a half-century later.

The NEHS mascot, Highlander, reflects the school’s heritage, as do the names of our school newspaper (Caledonian) and the yearbook (Tartan). A Caledonian is a native or inhabitant of ancient Caledonia or Scotland. Our dance and rally teams proudly wore the tartan reflecting the school’s colors. Bagpipes hang above the fireplace in the student area. 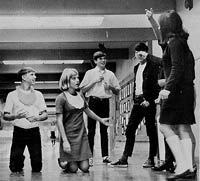 The filbert nut maintained its presence with NEHS students in the time-honored tradition of having members of the incoming class roll filberts by pushing them with their noses. Although discouraged in latter years as a demeaning form of hazing, many proud Highlanders have fond memories of this unique tradition.

In April 2004 NEHS staff, parents, and community members were approached with information about the Oregon Small Schools Initiative project and grant opportunities. After interviews with the OSSI granting committee, staff voted and an overwhelming 80% agreed to accept the grant, if it was offered.

In May 2004 a $900,000 grant from the Bill & Melinda Gates Foundation was awarded to NEHS. During the summer of that year, a team of NEHS staff formed to facilitate transition and manage the budget. The team consists of staff from all departments at NEHS.

Information was compiled about the variety of forms the new schools could take.

In January of 2005 various meetings and workshops are held to help staff envision and develop proposals for the new schools.

In May of 2005 a second vote was held to make the final decision about transitioning to small schools. More than 2/3 of the staff agreed that North should continue to transform into 3 small schools.

In the 2006 academic year, 3 small schools were implemented:

Alumni
Keep up with your classmates, visit our reunion page.

Skip back to main navigation
Translate »